By using and browsing our websites, you consent to cookies being used in accordance with our policy. If you do not consent, you must disable cookies or refrain from using the site. Ok
Home DERACOUP: SMALL IN SIZE, BIG IN RESULTS

It would be the first participation in a World Championship for our German ILLEX team members Daniel Rößger and his boat partner André Naumann. As result of their research, they found out, that perch were particularly difficult to catch at the Midland Waters (England), the venue of this year’s World Championship. That’s why the team decided to train specifically on this fish in the Netherlands. After only two days on the water, they could see that their strategy had worked out. Results up to the magical mark of 50 cm, thanks to NITRO SHAD 90 and DERACOUP, were reached. 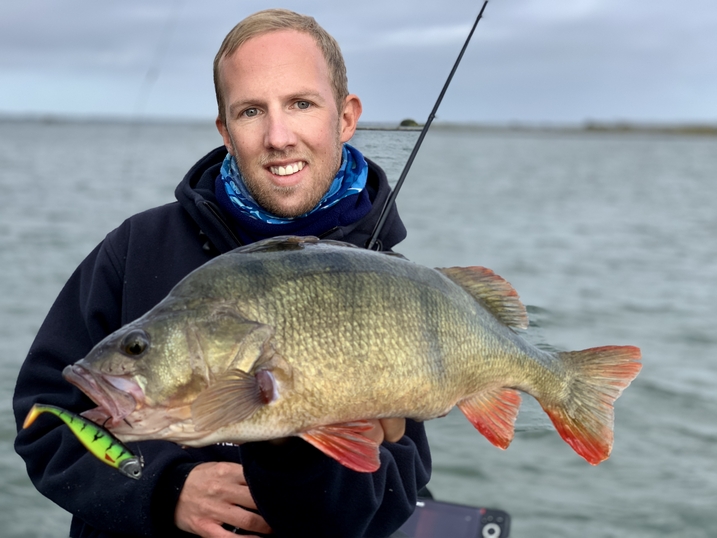 “Sometimes it’s really strange. Frankly speaking I don’t know why, but I had this kind of feeling,” said Daniel during the interview on the third day of his preparation. That’s why he changed his UL rod (rigged with a 0,30 fluoro and a 6,7 kg titan leader) to a THE ARTIST S 2402 MH DARK ELF, rigged with a 0,45 fluoro and a 15,3 kg titan leader. At 9:00 in the morning the guys started their fishing day by taking the boat directly to a spot that had been successful on the previous days. On arrival they spotted some distinctive “big arcs” on the sonar and a lot of activity. But nothing happened. Not a single bite. So they decided to go on and check some other spots on this huge water where the fishing had been good.

Hours passed by, and only a few perch were hooked. What they had seen on the sonar screen that morning, just kept on coming back in the conversation. Why hadn’t they been able to catch anything on that spot? They decided to navigate back to the first spot of the day and try it again during the afternoon. The zone was located 50 metres away from the shore with an impressive drop-off, that went from three to six metres. They stopped the boat and checked the sonar again. There was still a lot of activity on the screen. Bearing in mind that not a single perch had responded that morning, they decided to try bigger lures, and target pike and zander, which were probably what they could see on the sonar. They fished hard, cast after cast, changing lure after lure, but not a single bite bent the tips of their rods. Be it with a soft or a hard lure, it was simply to no avail.

Grinning and full of confidence, Daniel suddenly said to André “I’m going to rig a Deracoup now, just to show you that the fish are here.” Get ready, but believe or not, first cast, first bite! A fish grabbed the lure and just swam towards the boat making it feel like an average size perch. Suddenly all hell broke loose as the fish dived, “there’s no way this is a perch”, said Daniel “it’s got to be a massive zander”. Just as he finally managed to turn the fish, with a flick of its tail, it sped back to bottom in a brake screaming arm wrenching rush. All Daniel could shout was “the net, GRAB THAT NET!” as he tried to control the beast.

A few tense, heart pounding, nerve wrecking minutes later what broke the surface was anything but an “average perch” or a “massive zander”, it was a 128 cm, 18.15 kg monster pike, a new PERSONAL BEST! As she slid into the net, the two mates screamed in joy and relief, no doubt friends and family heard it back in Germany! Hooked on the left of its top jaw, the hero of the day, the 3/8 Oz. Deracoup in the AOTORA colour looked tiny. After a few quick photos to immortalise such a beautiful fish, Daniel release her while André lit a cigar to celebrate.

What a catch, great job guys!

Products in this article